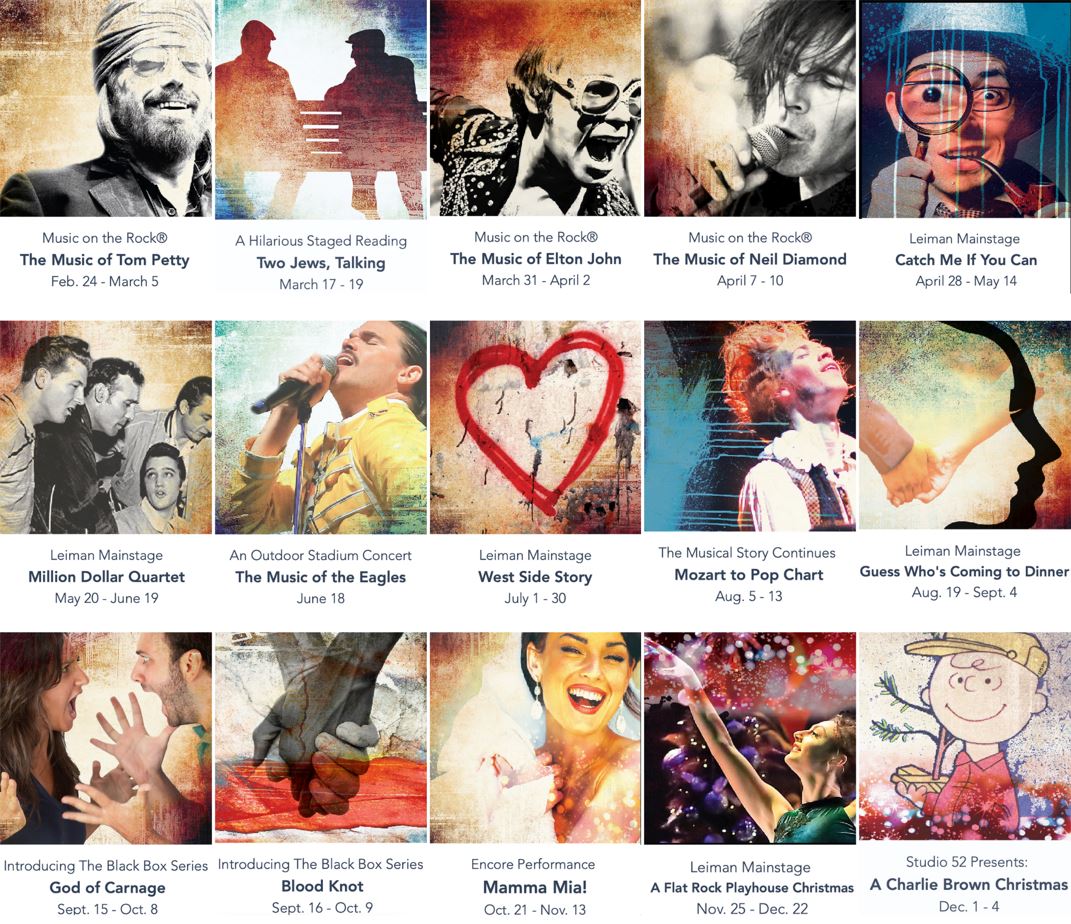 This year will feature an exhilarating blend of beloved productions, including Million Dollar Quartet, West Side Story, and Mamma Mia! The popular Music on the Rock® series, Studio 52 Family Programming, and a brand new Black Box series round out the 2022 season and mark a renewed beginning for FRP after a long pandemic shutdown.

The Music of Tom Petty

A side-splitting piece written by Ed. Weinberger, our characters take us on a rollicking romp through time! The two-act story brings Lou and Bud together in the Biblical past, and Phil and Marty together in contemporary Long Island. They philosophize about women, sex, food, the divine, and destiny in this tale of companionship and friendship.

The Music of Elton John

The Music of Neil Diamond

Catch Me If You Can

This comedy thriller is a classic gem with exciting twists and turns from beginning to end. “The final 15 minutes will reward you like a murder mystery should.” The New York Times

The Music of the Eagles

The Romeo and Juliet inspired love story of Tony and Maria amid the Jets and Sharks gang rivalry. Ranked #1 in the most recent survey of theatre patrons.

Nat Zegree (Jerry Lee Lewis/Amadeus) is back to whisk you away on an all-new musical journey through the history and triumphs of music from Mozart to today’s current hits. Featuring many of the local region’s best rock and symphonic musicians!

Don’t miss this fresh and relevant stage adaptation of the iconic film that starred the inimitable and great Sidney Poitier.

You’ve never experienced a play on The Rock like before. The audience and artists share the MainStage for an intimate and immersive theatre experience.  The Black Box Series will feature contemporary works, classics, and stories and playwrights from around the globe. Be among the first to join us on this new and exciting theatrical journey!

A play that asks us to dig beneath the surface of what makes us kin and what happens when we don’t like what we find there. By renowned South African playwright Athol Fugard.

The hugely popular mega-Broadway hit featuring the music of ABBA is back for an encore performance. Featuring songs like “Dancing Queen,” “Gimme! Gimme! Gimme!,” “Honey Honey” and so many more.

The WNC tradition continues. Same great show, all new material. A Playhouse favorite that will leave you feeling merry and bright!

To learn more about the 2022 lineup and how to purchase your tickets, please visit the website at www.flatrockplayhouse.org.

In 1937, a group of struggling performers, led by Robroy Farquhar, organized themselves as the Vagabond Players. The Vagabonds worked in a variety of places over the course of three years, and in 1940 found themselves in the Blue Ridge region of Western North Carolina. The local and tourist community welcomed them with open arms when they presented their first summer season of plays in a 150-year-old grist mill they converted into The Old Mill Playhouse at Highland Lake. So successful was that summer, they returned in 1941. After WWII, the Vagabond Players reorganized came back to the region and opened a playhouse in nearby Lake Summit. The Lake Summit Playhouse thrived during the post-war years and soon the Vagabond Players were looking for a larger and permanent home. In 1952, the troupe of performers, and a newly formed board of directors made an offer to buy an 8-acre lot in the Village of Flat Rock. This new home made the Vagabonds “locals” and a rented big top gave birth to Flat Rock Playhouse. As the beautiful Western Carolina region continued to grow, so did the Playhouse and in 1961, by Act of the North Carolina General Assembly, Flat Rock Playhouse was officially designated The State Theatre of North Carolina. What began as a few weeks of summer performances in 1940 is now a nine-month season of plays including Broadway musicals, comedy, drama, and theatre for young audiences. The Playhouse’s dual mission of producing the performing arts and providing education in the performing arts includes a professional series; a summer and fall college apprentice and intern program; and Studio 52, year-round classes and workshops in theatre and film for students from kindergarten through adults. Flat Rock Playhouse now hosts over 98,000 patrons annually and is a significant contributor to the local economy and the Arts in North Carolina.